Akazome Emon was a Japanese waka poet and early historian who lived in the mid-Heian period. She is a member both of the Thirty Six Elder Poetic Sages and the Thirty Six Female Poetic Sages. She was the daughter of Taira no Kanemori, the poet and the statesman, and the wife of Oe no Masahira. She was Lady in Waiting to Rinko, the wife of the great minister (Kampaku) Fujiwara no Michinaga. She is a later member of the great group of women poets. Ninety-two of her poems ae incorporated into court anthologies from the Shūi Wakashū (third imperial anthology of waka from Heian period Japan). She ranks fourth in the number of her poems that were included in the Goshūi Wakashū, (a later imperial anthology of Japanese waka compiled in 1086) with a total of 32 poems. More than 60 of her poems were included in the Kin'yō Wakashū (an imperial anthology of waka whose two drafts were finished in 1124) and later court anthologies. She is also believed to have been the writer of the first part of Eiga Monogatari (A Tale of Flowering Fortunes), an epic which relates events in the life of courtier Fujiwara no Michinaga. She left a personal collection, the Akazome Emon Shū. Compiled early in the eleventh century, it exists in two versions, one of which has definite categories of the four seasons, parting, travel, laments, Buddhism, transience, and miscellaneous; the other has no marked categories but is arranged in four groups, each of which is in chronological order. The relationship between these versions is not known, but both have at the end a prose section noting that the collection was compiled by Akazome Emon herself and presented to Fujiwara no Yorimichi, who was chancellor at that time. Perhaps they were compiled from different motives and with different emphases, although they share the same material. The chronological version would be closer to the original material and to the actual experience and life of Akazome Emon, while the other version is more formal.

The Five Hundred Disciples, The Parable of the Magic City,I can no longer tell dreams from reality,
I should not have waited,
It would have been better that I slept,
Eiga monogatari,
In my hearts depth,
Pines about my house 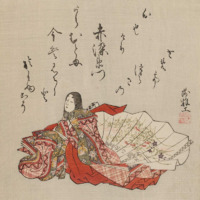